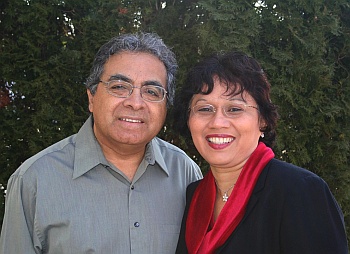 To provide training and teaching to Christian leaders in Latin America and the U. S.

Enrique and Becky live in Costa Rica. Their son Hector and his wife Michelle live in New York City, and their daughter Liza recently graduated from Moody Bible Institute in Chicago, IL, and now works for ReachGlobal Home Office.

Enrique holds a degree in Electrical Engineering, as well as an M. Div. from Trinity Evangelical Divinity School and a PhD in Intercultural Studies from Trinity International University. Enrique has planted churches and been a pastor in Guatemala and Miami. He has taught theology and trained leaders in Latin America, India and Kenya. Becky has a degree in Psycho-pedagogy and has ministered with Enrique through an extended training ministry among women.

Enrique was called to ministry while serving his home church and leading the Guatemalan chapter of the International Fellowship of Evangelical Students. After struggling with Existentialism and materialist philosophy early in college, Enrique saw the incompatibility of these movements with his faith, and decided to trust the Lord only and serve him fully. This call was confirmed by family and spiritual mentors in Guatemala.

After working as an electrical engineer, in 1985 Enrique entered into full time ministry.

Becky was called to ministry as a teenager. She has developed a special concern for young people and women in ministry.

Enrique and Becky have been missionaries with the EFCA since 1992, first working in church planting in Miami and theological education in Latin America. More recently, from 1999 to 2005, Enrique led the EFCA Urban & Intercultural Mission, serving to 25 ethnic groups and over 270 ethnic congregations.

At the end of 2005 Enrique and Becky joined the Latin America Training Network (LATN), a ministry of the EFCA International Mission, to provide training and teaching to Christian leaders in Latin America and the U. S.

Today, more than ever, the Latin American Church and the Latino churches in the U. S. need quality leadership to launch a church planting movement, and training to cop with false doctrines and social challenges they face in their ministry.

LATN provides Latin America's evangelical leaders with accessible and cost-efficient theological education, allowing leaders to grow and learn without requiring them to leave their existing countries, ministries, jobs, or families. LATN strengthens Latin American churches by assisting with the development of their own leaders. LATN develops and shares courses with other Latin American theological institutions, thus helping to strengthen the Kingdom of God through strategic partnerships.

With their culture, language, studies, and experience, Enrique and Becky are key to the training of this new generation of leaders.