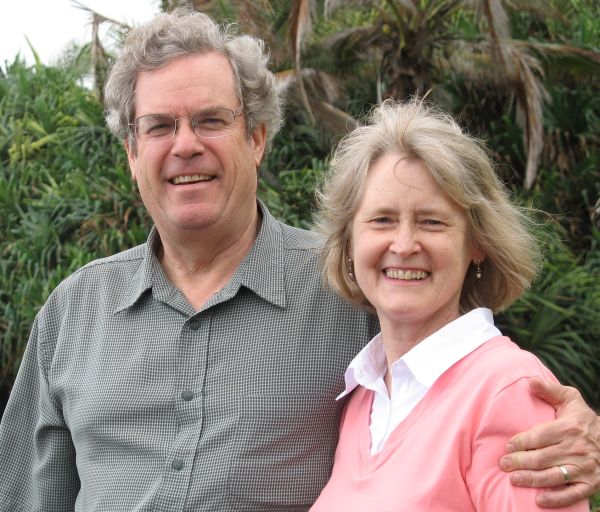 Lori grew up at First Free with a desire to be a missionary from a young age. John and Lori were married here at First Free in 1971 while completing graduate school training to serve as missionaries in Malaysia which they did for seven years.

John has travelled throughout the world for almost 40 years, leading prayer and mission initiatives, consultations and seminars for Christian leaders in more than 100 countries. He also led the Unreached Peoples track for the AD2000 and Beyond Movement and coordinated the Great Commission Roundtable that brought together hundreds of mission leaders from many diverse ministries. Having witnessed the powerful and transformative ways God works when spiritual leaders unite in prayer for their societies and common mission, he began to increasingly emphasize united prayer. With international teams of facilitators, he has led interdenominational prayer initiatives in more than 60 nations. To the glory of God, during such initiatives, extraordinary social, political and ecclesiastical changes have often taken place as the Lord has answered corporate prayer in stunning ways to bring about breakthroughs of reconciliation and restoration in awful situations of war, corruption and oppression. By God’s marvelous mercy and grace, eight hopeless wars have resulted in peace agreements in this way. Thanks be to the Lord!

Currently, John serves as Chairman for International Prayer Connect, a network of regional and national prayer ministries and networks around the world that came into being after 9/11. The IPC focuses on global issues of common concern to the Body of Christ such as war, terrorism and other humanitarian issues, as well as the fulfillment of the Great Commission. In 2006, 2008 and 2013, the IPC organized Global Children in Prayer Consultations bringing together CiP practitioners from more than 70 nations. In 2007, 2009 and 2013, the IPC brought together hundreds of prayer leaders and intercessors, including youth and children, to pray with ambassadors inside the United Nations. Working with the Indonesian prayer movement, they organized the World Prayer Assembly in 2012. The WPA connected more than 2 million believers in almost 400 cities within Indonesia and many more through satellite TV and Internet-streaming around the world. They are now working with an international team of youth leaders to plan national and international UPRISING youth prayer assemblies (www.unitedprayerrising.com) that enable young people to pray together for the world and find their unique missions within it. Part of this and other prayer/mission initiatives focuses on reaching the remaining Unreached People Groups that still have no indigenous community of believers with sufficient numbers and resources to reach their ethnic groups with the Gospel. (For your interest, a prayer guide that a joint missions/prayer team recently produced about the largest remaining unreached people groups is attached below as is a video we produced through the IPC about linking prayer and missions.)

John, working with colleagues who lead prayer ministries in the USA, has also helped many prayer networks to come more closely together to pray for our country and better coordinate their efforts through the National Prayer Assembly. The next NPA will happen in Washington, D.C. in early October 2018.

Lori joins John in linking prayer and mission efforts. She currently helps inspire our church’s worship through playing the pipe organ as well as leading two prayer ministries through our church that focus on our city of Albuquerque, state, nation and world.

John and Lori have been married for 47 years and have three adult children and two grandchildren.

Spirit of the Moravians 9-min