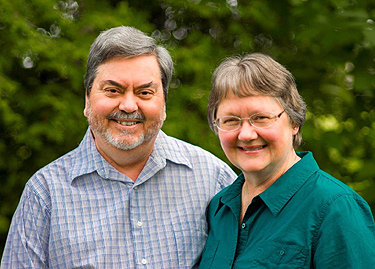 Ernie came to the Lord in his first year at Indiana University from a completely non-church background. Donna accepted Christ in her second year at the same school, having been reared in a Catholic home.

Both were trained in discipleship and evangelism by the Navigators. Even before their marriage in 1976 both Donna and Ernie were called of God to serve as missionaries outside of American culture. Between 1979 and 1985 Ernie studied at Trinity International University where he earned two master's degrees. Meanwhile Donna used her master's degree from I.U. to work as a speech therapist.

Lauren was born in Cebu City in 1988. Kyle arrived during a home assignment in Illinois in 1990. Donna joined the teaching faculty at ETCP in 1991. In 1995 the Manges family took a study leave and moved to Scotland where Ernie earned his Ph.D. in Church History from the University of Edinburgh.

In 2007 God expanded Ernie and Donna's ministry to include:

Dr. Ernest Manges has served as a missionary in Asia since 1987 along with his wife Donna and their three children (now all adults).  Ernest divides his time between two ministries.  In the Philippines, he teaches at a seminary training Filipinos and other Asians as pastors, missionaries, evangelists, and Bible teachers.  For the Evangelical Free Church of America (EFCA) he helps train all new EFCA ReachGlobal missionaries that serve across the world.  He is a member of the Spiritual Heritage Committee of the EFCA and the Theological and Missiological Advisory Council for ReachGlobal.  He has an M.A. and M.Div. from Trinity and his Ph.D. in early church history is from the University of Edinburgh (Scotland).