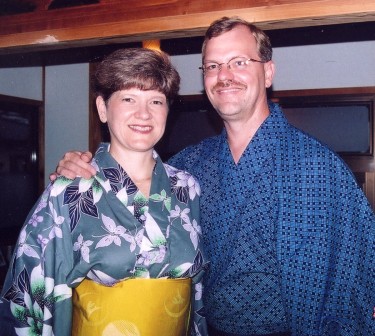 Andy and Lorna have been with the Free Church Mission since 1991. While in seminary, Andy served as Outreach Director at the Naperville (IL) EFC and Lorna worked with the short-term program developing and implementing Outreach English Camps. Together they led teams to Hong Kong. Upon graduation they served a term in Japan doing church planting. They had been working with the recruitment, placement and training of new missionaries at the Home Office for 3 years before returning to Japan as church planters in 2002.

Japan is an island chain, located in Eastern Asia, between the North Pacific Ocean and the Sea of Japan.

This nation has a population of approximately 127 million, of which 99.4% are Japanese. There is also a small minority of Koreans.

The majority of Japanese observe both Shintoism and Buddhism. Christians comprise on 0.7% of the population.

Andy grew up in a religious home, the youngest of 6 boys. He came to know Jesus as His personal Savior after moving to Chicago and beginning work at AT&T as an engineer. At the Naperville Evangelical Free Church, Andy heard a missionary speak about his ministry and was challenged to respond to share the gospel worldwide. While pursuing mission opportunities he met Lorna.

Lorna came to know the Lord in Junior High School when invited to church by a friend. Her vision for missions began while attending Illinois State University. Through her involvement in Inter-Varsity Christian Fellowship Lorna committed herself to missionary work and served a summer in Japan in 1982.